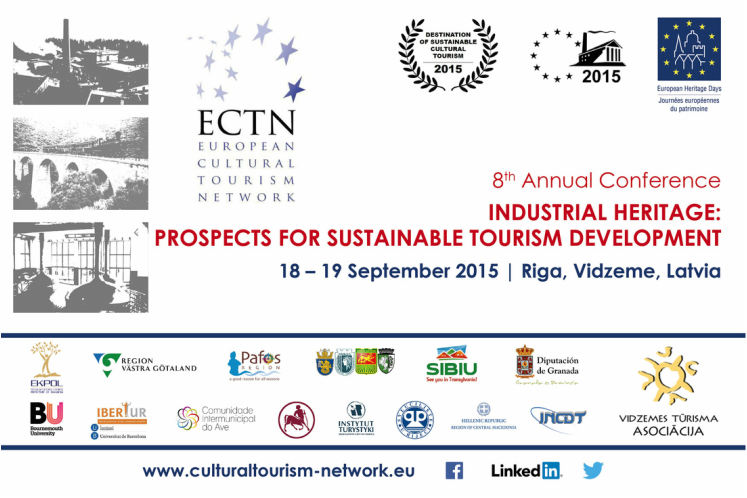 Industrial Heritage Tourism consists of the remains of industrial culture which are of historical, technological, social, architectural or scientific value of buildings and machinery, workshops, mills and factories, mines and sites for processing and refining, warehouses and stores, places where energy is generated, transmitted and used, transport and all its infrastructure.

In the framework of this campaign by E-FAITH and on the occasion of ‘European Heritage Days’, ECTN organised its 8th annual international cultural tourism conference on the theme ‘Industrial Heritage: Prospects for Sustainable Tourism Development in Europe’ on 18 – 19 September 2015 in Riga, Latvia.

During the Conference the latest trends in the field of industrial heritage, including innovation, creativity, design, research and development and sustainable tourism product development were discussed, as well as the major challenges for the future.

Panelists A.Linters from E-FAITH, P.Laconte from Europa Nostra, D.Morgan from FEDECRAIL, D.Robbins from Bournemouth University (UK) and A.Biedrins from Industrial Heritage Trust of Latvia shared examples and views, while engaging the whole audience into an open discussion, moderated by Manos Vougioukas, Transport and Tourism Advisor from Greece.

During this Conference there was a ceremony of the ECTN Award 2015 prize for “Destination of Sustainable Cultural Tourism” on theme ‘Industrial Heritage Tourism’. The Panel of Judges has decided that the Award “Destination of Sustainable Cultural Tourism 2015“ 1st prize is awarded to Bydgoszcz Water, Industry and Craft Trail TeH2O in Poland, with the  2nd prize awarded to Carob Mill and Warehouse in Limassol, Cyprus and the 3rd prize awarded to Daugavpils Shot Factory, in Latvia for significant results and achievements in Industrial Heritage Tourism in Europe.

At the end of the Conference it was announced that the next, 9th annual international conference on cultural tourism in Europe will take a place in Guimaraes - one of the most important historical cities in Portugal and European Capital of Culture 2012. Guimaraes historical center is a UNESCO World Heritage Site.