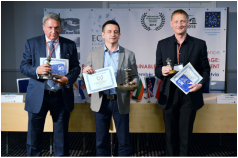 ​Awards for ‘Destination of Sustainable Cultural Tourism 2015’ go to Poland, Cyprus and Latvia

Cultural and heritage tourism is the fastest growing sector of European tourism and can contribute to the sustainability and competitiveness of tourism in the European Union.
European Cultural Tourism Network (ECTN) has initiated the only award in cultural tourism across Europe for nomination ‘Destination of Sustainable Cultural Tourism’ Award to tourism destinations Europe-wide for the benefit of destinations, communities, businesses, citizens and visitors.
The Theme for 2015 was ‘Industrial Heritage Tourism’ concerning results of actions which have been implemented and have produced significant results and achievements by destinations with a focus on local, regional, state or European context.

The winners of the ECTN Award 2015 on the theme ‘Industrial Heritage Tourism’ were announced at the Award ceremony during the international conference “Industrial Heritage: Prospects for Sustainable Tourism Development in Europe” on 18 September 2015, which was organised in Riga, Latvia.

During the ceremony, the three winners, selected by a Panel of Judges among all candidates were announced, honoured with Award ‘Destination of Sustainable Cultural Tourism 2015’ and received special prize, certificate and sign by E-FAITH.

The three winners are:

1st prize: Bydgoszcz Water, Industry and Craft Trail TeH2O in Poland
TeH2O: Bydgoszcz Water, Industry and Craft Trail was created in 2014 within a European Union project called SHIFT-X that aimed at bringing back the glamour and knowledge of the past industries. TeH2O is an industrial thematic trail that unites the history of 15 organically water-centred places in Bydgoszcz which unites the tales of the Bydgoszcz craftsmen, entrepreneurs and city activists.

2nd prize: Limassol Carob Mill and Warehouse in Cyprus
The Carob Mill Complex which is located next to Limassol’s Medieval Castle was originally built in the late 1800’s and was used as a warehouse.  In the late 1920’s it was converted into a carob mill where carobs were processed.  Carobs were used primarily in the manufacture of film, medicines, honey, chocolate etc.  When the ingredients of carobs were no longer needed for the manufacture of these products, the carob mill was converted into a warehouse for fertilizers in the late 1960 and was used as such until the year 2000. Most of the machinery used for the processing of carobs are still intact and constitute a major attraction for the tourist and local population.

3rd prize: Daugavpils Shot Factory in Latvia
Daugavpils Shot factory is one of the oldest industrial enterprises in the territory of Latvia and one among oldest ammunition factories in Northern Europe founded in 1885. During 2014 historical part of the Factory was investigated by the State Inspection for Heritage Protection of Latvia and it was recognized as National Industrial heritage monument, being one of just 13 in Latvia.

​
The next ECTN Award contest for destinations will be announced in March 2016 on different topic and Award ceremony will take a place in Guimaraes – European Capital of Culture 2012 in Portugal during the 9th annual international conference in September 2016.

This list is published with permission of Applicant
© Description and photo provided by Applicant
CROATIA
LATVIA
POLAND
ROMANIA
SPAIN
About ECTN Award 2015
Culture and Heritage are important factors for sustainable development; contributing to the protection of natural and cultural heritage, the extension of tourism period as well as increase awareness of tourists and host communities, regional GDP and multiplier effects.
The development and protection of culture, heritage and development of sustainable tourism strategies are of added-value to regions and Europe-wide.

Theme for 2015 is ‘Industrial Heritage Tourism’ concerning results of actions which have been implemented and which have produced significant results and achievements by destinations with a focus on local, regional, state or European context related to:


Winners will be recognised as examples of excellence inspiring other tourism destinations and stimulating further development of regional initiatives.
One overall winner and two runners-up will be awarded.
The Winners will be announced at the Award ceremony and receive the Awards during the international conference “Industrial Heritage: Prospects for Sustainable Tourism Development in Europe”, to be held on 18 – 19 September 2015 in Riga, Latvia, all candidates will be invited.
Materials submitted will be promoted with acknowledgement to the Applicant at our website and announced in social media.
Applications will be evaluated by the special Award Commission (panel of judges) consisted of the experts from various countries.  The Award Commission will assess the quality of all applications according following five criteria: technical content of actions, evidence of success, sustainability of the actions; added value to Regional policies for Tourism Sustainability and contribution to Europe 2020 targets.
As this is an international panel of judges, Applications must be submitted in English.

The Sustainable Cultural Tourism Award has been initiated by CHARTS project, co-financed by the European Regional Development Fund and made possible by the EU INTERREG IVC programme in 2014.   It was agreed, that ECTN will take it over in the future in order to continue competition between destinations for Cultural Tourism Development and Promotion.
For more information including past winners, candidates and photo gallery, please, visit http://www.charts-interreg4c.eu/events/charts-award-2014/

The ECTN Award is based on a contest around annual theme for the benefit of destinations, communities, businesses, citizens and visitors to be launched annually on the different topics.

The ECTN Award is aimed at tourism destinations Europe-wide, for achievements of results and outputs on cultural tourism.