​'In the footsteps of Saint Paul, the Apostle of the nations'
​

​ECTN organised the 1st Conference as a founding member of the respective European Grouping of Territorial Cooperation (EGTC), established in the frame of: Cult-RInG Interreg Europe project 'Cultural Routes as Investment for Growth and Jobs',

A Participatory Lab was held at the European Week of Regions and Cities 2020 digital event, on:
Cultural & Creative Industries 4 Tourism

organised by the Council of Europe and EICR

Sibiu County Tourism association is a member of ECTN.

The Forum was concluded with the Sibiu Declaration.

All of the above are addressed in various ways and at verious degrees by the Cult-RInG Interreg Europe project, which highlights the value of European Cultural Routes as investment for growth and jobs. The above will be very useful synergies with the Cult-RInG Action Plans implemented during Phase 2 of the project. The Action Plans involve improvements and extentions of existing Cultural Routes certified by the Council of Europe, such as St Jams Way in north Portugal, Via Francigena south in Lazio Region Italy, The Hansa in Vidzeme region north Latvia, St Olav Ways in west Sweden, Iter Vitis and Phoenicians in Pafos region, Cyprus, Iter Vitis in the Region of Central Macedonia, Greece.
​
The full declaration can be found at:
https://www.coe.int/en/web/cultural-routes/sibiu-declaration

​ECTN keynote address at the International Conference on Archaeology and Tourism, entitled:
​
'The Charter for Sustainable Cultural Tourism &
the European Year of Cultural Heritage 2018 legacy'

ECTN participated in the 3rd UNWTO/UNESCO World Conference on Tourism and Culture​​​The theme ‘for the Benefit of All’ had two priorities:
​
1) creating more inclusive partnerships between tourism and culture stakeholders that contribute to SDG implementation; and
​
2) promoting tourism development that encourages cultural interaction and ensures the benefits are shared by all communities involved. 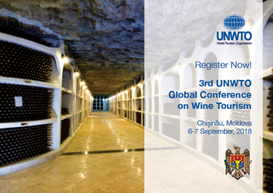 ECTN participated in the 3rd UNWTO Global Conference on Wine Tourism:
Wine Tourism as a Tool for Rural Development

The heritage interpretation aspects of the CHRISTA Project were presented by ECTN at the Interpret Europe Conference 2018 that took place from 23 to 26 March in Kőszeg (Hungary). This conference was part of the 2018 European Year of Cultural Heritage. Theme of this year's conference was 'Heritage and Identity'. The question of identity is key when it comes to one's feelings towards Europe in all its diversity and one's relationship with single nation states, regions and local communities. The title of ECTN's presentation was:

ECTN participated in the European Culture Forum in Milan, Italy,

at the launch of European Year of Cultural Heritage 2018

ECTN at the Working Group of Member States' experts on Sustainable Cultural Tourism, in Bruges

ECTN presented the Charter for Sustainable Cultural Tourism at the ﻿﻿Visitor Economy Conference at Bournemouth University﻿﻿, on 5 September 2017.
​

ECTN in the programme of the symposium 'The Future of Tourism in Europe: Promoting Competitiveness Through Sustainability and Digitisation' on the initiatives to promote Europe’s Cultural Heritage in Brussels on 4 July 2017.

ECTN participates in a high-level event of European Parliament and UNWTO on 'Connecting Europe through Innovations' in Madrid on 24 March 2017.


The 1st World Conference on Smart Destinations took place at Murcia, Spain, co-organized by UN World Tourism Organization (UNWTO), the Spanish Ministry of Tourism and the Region de Murcia, with the participation of ECTN.

ECTN joins the celebrations for the UN International Year of Sustainable Tourism for Development 2017!


The contribution of ECTN to celebrating #IY2017 is mainly in the form of sharing the Thessalia Charter for Sustainable Cultural Tourism – Second edition, which will be included in the #IY2017 website under ‘sharing solutions’, all of our events and activities planned to take place during 2017.
ECTN organised a special event in Brussels on 30 November 2016, to launch the 2nd edition of the 'Charter for Sustainable Cultural Tourism' and in preparation for the European Year of Cultural Heritage 2018.